Turns out our favorite vampire has been dumpster diving, of a sort: The story starts with Robert Pattinson, isolated in an Airbnb in London, while coronavirus has shut down filming of Batman, since March. He confesses to GQ that he is eating garbage, making pasta burgers and losing track of what day it is.

Now everyone is trying to make his horrifying pasta recipe that involves cooking the pasta in a microwave, adding cornflakes, cheese slices, a douse of any sauce you have lying around and putting the whole thing onto bread, essentially making it a "pasta burger." R Patz also confesses to ripping open tuna cans, adding a shot of hot sauce, and digging in. He tells the magazine: 'I eat out of cans like a wild animal.' And adds:  'Like, I eat out of cans and stuff.

The picture of the former Harry Potter actor (remember him as Cedric Diggory in The Goblet of Fire in 2005.?) for GQ features him wearing an oversized chalk-striped Louis Vuitton blazer but he doesn't look like he showered since the last Twilight. Turns out that the upcoming Batman actor, now 33, is trending on social for some majorly strange food habits. Everyone wants to make his "pasta burger" and share it. People have been making memes out of it.

For the June/July issue of GQ, the star photographed and styled himself from his flat in what is the first of its kind photoshoot for the magazine. He shows himself in a "smart jacket from Louis Vuitton’s pre-fall ’20 collection. Made from wool, the timeless design features a double-breasted front and classic pinstripes in a navy and white palette," GQ says. We're guessing the blazer was a freebie, given Pattinson's frugality in the kitchen.

R Patz shoots himself for GQ. Photo by GQ

Over facetime, the former teenage heartthrob (As Edward Cullen in the Twlighligh series, he had throngs of vampire lovers swooning) Pattinson said he was struggling to adjust to having to constantly feed himself after relying on studio diets and restaurants in��normal life. His quarantine confession:

It's no surprise that he's an odd duck, but people especially appreciate how out there he's acting as if he is somehow living out our fantasies of totally falling apart.

Then Pattinson really gets rolling, telling more than perhaps even the interviewer expected about his weird eating in isolation habits. Pattinson admitted eating out of a trash can. And  (in what doesn't sound so disgusting to us, even in normal times), he shared: "I'll literally put Tabasco inside a tuna can and just eat it out of the can… it is weird, but my preferences are... just sort of, eat like a wild animal. Like, out of a trash can."

While the rest of the world is cooking up a storm, Pattinson is diving into his trash can for morsels. Meanwhile, he also revealed to GQ that he had written a business plan last year for a pasta you can hold in your hand like pizza or a burger. (We think maybe this is all a marketing stunt -- and a genius one at that!)

Pattinson said he even played around with a prototype involving a sandwich press and went so far as to meet with restaurateur Lele Massimini about the product, which he named Piccolini Cuscino, meaning "little pillow" in Italian, but so far nothing has come of it. Still, this interview could launch his culinary career. Stranger things have happened.

Pattinson  half-joked: 'Maybe if I say it in GQ, maybe, like, a partner will just come along.'

GQ reports that the Batman-to-be then proceeded to try to create a version of his product with microwaved penne pasta, sliced cheese, sugar, a burger bun and cornflakes.

But his effort turned dark when --while trying to flambe initials into the bun with a stick lighter -- he instead set his latex glove on fire. Where was the stunt double, we ask? Pattinson then wrapped the pasta pillow in aluminum foil and placed it in the microwave, inevitably causing it to explode. (Has he not seen American Hustle? This is exactly how to try to start a fire!) 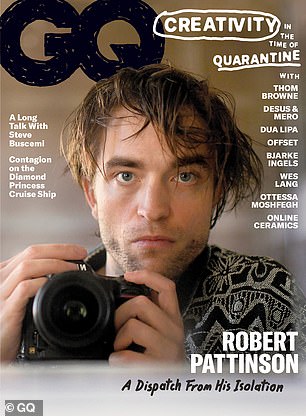 For the entire interview, the June/July issue of GQ is available from May 26.

Meanwhile, if you're looking for pantry recipes to make without leaving the confines of home, we can suggest some of The Beet's healthy plant-based recipes.

R-Patz, instead of eating like an animal, give up animal products. And home chefs, if you're going to try his Pasta Burger -- make it vegan by just adding Miyoko's plant-based Cheddar slices. They're delicious.

This definitely solidifies what we knew to be true all along. We're Team Jacob.