Jim Cramer, the loud-talking truth-telling host of Mad Money, told investors that "the plant-based movement is happening" and they can either "get on the bus" or get left behind.

He talked with the CFO of Impossible Meats David Lee, and said that he and tried the Impossible Burger at a Giants game and thought: "This is just delicious. They've got to get this out there."  Cramer hosted Lee, to ask how the Covid-19 crisis is effecting business now that restaurants are closed, and Lee reminded him that now Kroger and other distributors are carrying Impossible meats so consumers can make them at home. Plus, most of their consumers are meat-eaters who are turning to plant-based during the health pandemic.

Cramer said: Americans may be thinking now that meat plants have been closed, "maybe the problem is with packing houses, and I want to try the plant-based " Lee agreed that this is a moment to innovate and that Impossible is bringing out plant-based "pork" and working on poultry and fish as well.

“It starts like this. It doesn’t begin with a billion dollars. This is not a blockbuster drug, but watch this trend,”  Cramer said. “I think it’s very exciting for investors.”  He was acknowledging there are not huge sales of the meatless products yet for a company like Beyond Meat, which reported quarterly revenue of $97.1 million, up 141% year over year.

Shares of Beyond Meat were up roughly 17% to about $118 each, which gives Beyond Meat a $7.2 billion market value, up from its May 2019 initial public offering. Then priced at $25 per share, the stock shot up to nearly $240 by last July. But came back to earth by December, having lost about 70% of its value. Beyond Meat then rebounded--earlier this year--before tumbling to a new 2020 low of $48 in mid-March. Since then, the stock has more than doubled.

Cramer is bullish on the industry, not just the story of one company. Beyond and Impossible are the biggest or most visible players, but more mainstream companies are playing in the space. And Americans are getting turned off from beef, pork and poultry due to the fact that the Covid-19 outbreaks in meat processing plants are pulling back the curtain on how meat is made and the risks to workers and inhumane treatments of animals at slaughterhouses are turning consumers off meat.

The “Mad Money” host said he believes the plant-based meat industry may ultimately be one of the biggest beneficiaries of the Covid-19 crisis.

Meatpacking plants across the U.S. have seen significant virus outbreaks, forcing some to slow down production or temporarily close as workers became sick. The developments ignited concerns about the country’s food supply, although President Donald Trump signed an executive order last week requiring the plants to remain open during the coronavirus pandemic.

Plant-based meat options have traditionally been more expensive than traditional meat, Cramer said the rising costs of beef, due to the plant closings and shortages, represents an opportunity for plant-based producers.

Here is the story of Beyond Meat, which has rebounded during the pandemic: 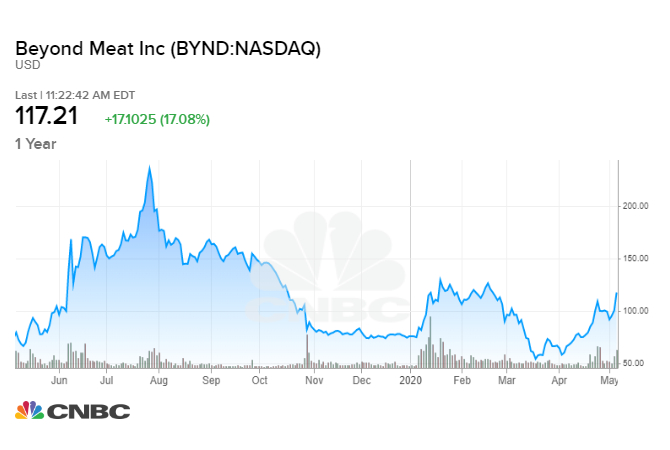 Meanwhile Live Kindly reports that the coronavirus pandemic could cost the meat industry billions of dollars, according to a new study.

The National Cattlemen’s Beef Association (NCBA), which commissioned the study, by a team of agricultural economists, concludes that the beef industry could lose up to $13.6 billion as a result of the COVID-19 outbreaks.

“This study confirms that cattle producers have suffered massive economic damage as a result of the COVID-19 outbreak and those losses will continue to mount for years to come, driving many producers to the brink of collapse and beyond if relief funds aren’t made available soon,” NCBA’s CEO Colin Woodall said in a release.

Filed Under: COVID-19
Categories: Business News, News
Comments
Leave A Comment
Back To Top
The 5 Best Plant-Based Products This Week, from the Editors of The Beet…