A new survey reveals that nearly one-quarter of all Americans are eating more plant-based foods now, during the COVID-19 crisis. At the same time, one in three people says they are binging on junk food. One thing everyone is doing: Spending more on groceries.

In a poll of over 1,300 Americans, asking them about their food habits during the global pandemic, the credit-building company Self.inc found that almost a quarter of respondents say they are now eating more vegan food. The company is not interested in the veganization of America, but instead, they were looking to find out about the public's spending habits during the pandemic and with that came an interest in the kitchen, too, according to a spokesperson.

The survey revealed several ways consumers are reacting to the pandemic :

The pandemic and fears of COVID-19 have us doing more than washing our hands, staying home and wearing masks when we do venture out. It's also changing people’s kitchen habits. One of the survey's highlights shows the realization among the public of the power of plant-based foods to help create a healthier immune system, have more energy, lower blood pressure, and be generally healthier, which people are putting a premium on right now.

Among those surveyed, 18-24-year-olds were the largest age group to engage with plant-based foods during the pandemic, eating 29 percent more now, followed by those ages 55-64 who ate 24 percent more–both groups being higher than the national average. 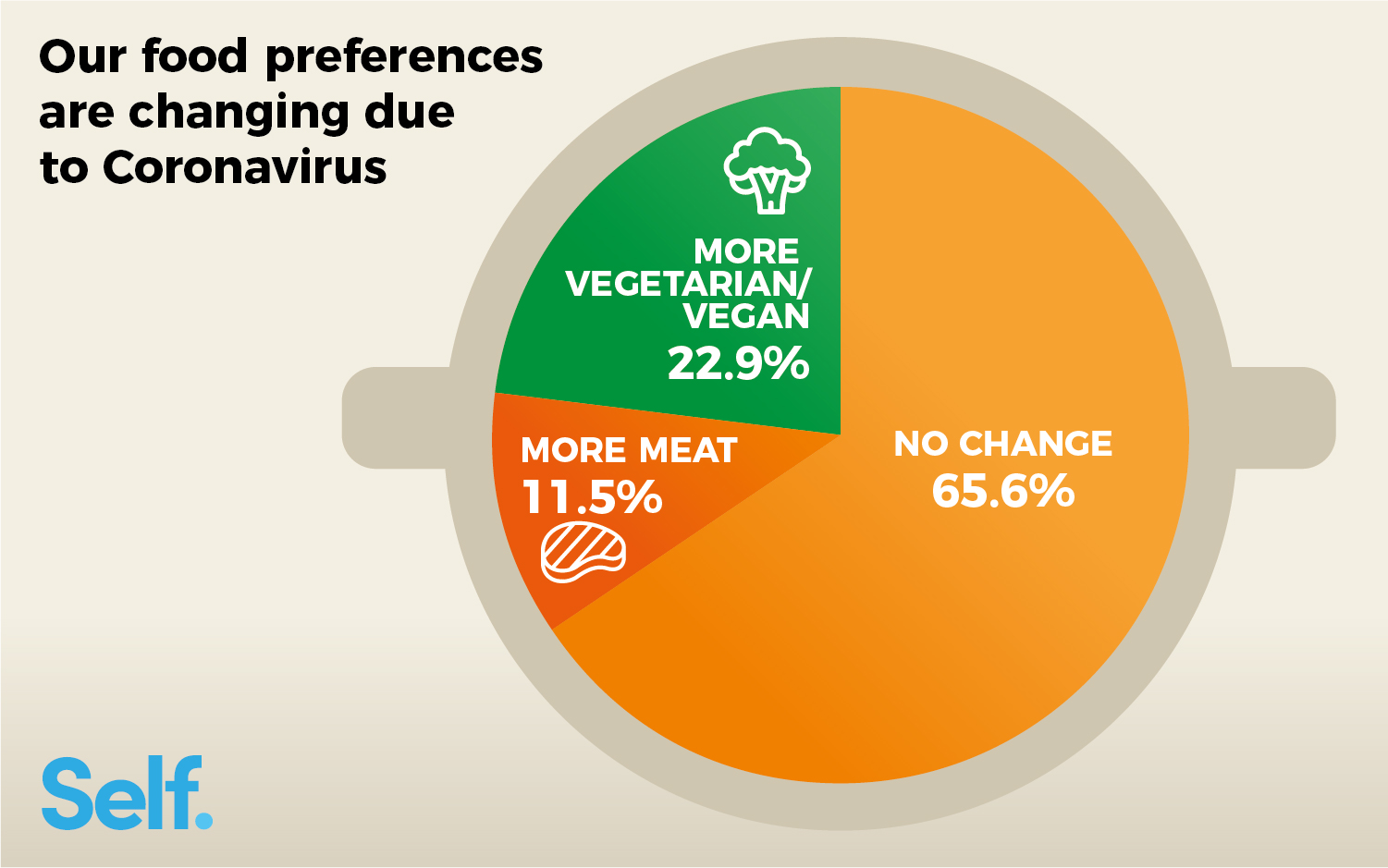 Shena Jaramillo, a registered dietician at Peace and Nutrition interviewed about the changes in eating habits, explains the vegan choices people are making now:

"I am seeing an uptick in consumers choosing plant-based products during COVID-19, as these are the items that tend to be most shelf-stable. For example, nuts, beans, rice, quinoa, are proteins that last longer than animal-based products."

Still, it's not all broccoli and brussels sprouts. Many people are turning to junk food now.

Nearly one in three surveyed (32 percent) revealed that they were eating more junk food due to quarantine measures, while 31 percent said they had taken this time to eat more healthy options.

Respondents were also asked if they were learning to cook or experimenting in the kitchen, and one in 3 people surveyed (33 percent) confirmed that they were.

While some people are spending more time in the kitchen, more than a quarter of those polled (27 percent) said they are rationing food during the pandemic by eating less than they normally would.

When asked about their grocery store habits, 67 percent of shoppers admitted to spending more on their weekly groceries. When questioned further about exactly how much money they were spending, the average person was found to be spending $69 extra a week on their grocery bills.

This amounts to people spending an average of $147 a week on groceries, which represents a 128 percent increase in costs, compared to previous figures reported in 2018 on household expenditures; then the average American household spent $78 on groceries per week.

A quarter (24 percent) of respondents said they spend even higher, between $100 and $200 extra per week on top of the existing average amount. When asked about their shops of choice, two in five (39 percent) respondents stated they will be boycotting businesses that did not act responsibly during the pandemic, such action was recently seen with the beauty brand, Sephora, which experienced mass layoffs last month, in a single roll call that was covered in the national media.

“It’s promising to see that this economic uncertainty is not stopping people from spending more in the shops and experimenting in the kitchen with new ingredients," said James Garvey, CEO, at Self.inc. "A 128 percent increase in weekly grocery expenditure is unprecedented.

“Plant-based foods are seeing annual growth of over 11% according to recent studies, and with people having more time indoors, it’s no surprise that many are taking this time to craft new meals without animal products. As consumers change their eating habits, innovation will always follow, and we look forward to seeing how purchasing decisions continue to change once the pandemic is over.”