When this college student went home and discovered her mother had lost a significant amount of weight, it was a wake-up call. She didn't want to be the biggest person in her family. Now, 70 pounds later, she has the confidence to follow her dreams.

In November 2017, I came to New York City from Savannah, Georgia to celebrate Thanksgiving with my family. I hadn’t seen my mother in a year, and she looked like a different person, after losing about 50 lbs and was down to a size 6. I saw her and my sister, who is thin and toned, and decided I needed to make a change in my eating habits. I had always been told it was harder to lose weight when you got older but my after seeing my mom do it I felt inspired to try for myself. I didn’t want to be known as the fat sister.

After returning to Savannah, where I lived while attending the Savannah College of Art and Design, I stopped revolving my life around food. School was really stressful but I had to stop using it as an excuse to binge eat. So I cut out most sugar and carbs for the first three months and I stopped drinking soda and allowing myself to eat chocolate in bed… for breakfast.

The biggest change in my diet was cutting out dairy and meat and substituting that lifestyle for a plant-based approach. Quite coincidentally, a vegan restaurant called Fox + Fig had just opened a block from my apartment, which made the transition much easier. Their smoky Mac + Shrooms is amazing and their barbecue seitan makes you forget you ever ate meat.

The Weight Fell Off.

By March of 2018, in just four months, I had gone from a size 12 to a size 6, simply by changing my diet to a plant-based approach-- I wasn't even exercising any more than before, which soon changed because I weighed less and as a result, had more energy!

I found I could run longer distances without feeling like my gums were bleeding. I was stronger and was mastering yoga poses such as side plank or mermaid pose that prior to my change just felt hopelessly impossible.

Before I lost the weight, I remember visiting New York City and taking the train home from the airport, struggling to maneuver my suitcase along four train cars to an exit. I was out of breath, my arms hurt and nobody volunteered to help me because living as a heavier person you seem to become invisible to others. At least I did.

By June of 2018, I was down to a size 4 and arrived back in New York City to live after graduation, and suddenly my suitcase felt easy to carry! It definitely wasn’t lighter (this girl can pack) but now I was able to pick up a suitcase that was over half my size and haul it up the train station steps like it was second nature! 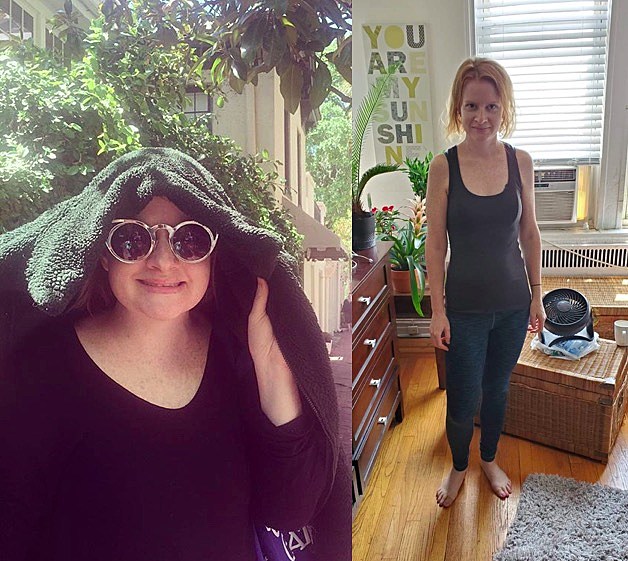 As a girl with a sweet tooth, I was instantly tempted to try all the goodies in the city and did let loose a little bit. In July, of 2018, I broke my veganism for Ooey Gooey Buttercake ice cream from Ample Hill on the beach during the Fourth of July. Peer pressure! All of my friends were doing it and I have a soft spot for trying new things. I had on a crop top and after having a scoop, and some frosé I looked down while dancing and saw my bloated stomach. I decided that I didn’t want to have a stomach like that anymore.

So I made it a mission to discover the best vegan treats in the city because if I were to indulge, I wanted to make it count. What I discovered were loads of options like Van Leeuwen’s salted-caramel ice cream, by CHLOE's Espresso Cinnamon Chocolate Chip Cookies and Dough’s cookie batter scoops, all vegan and most of the time tasting better than the dairy version without feeling guilty, sick to my stomach or bloated. (The Beet also has city guides for Manhattan and Brooklyn)

As an adult, who has always loved coffee for years, I would add half and half to my caffeine every day even though it always bothered my stomach (I am lactose intolerant), but there was just no comparable substitute for a very long time, and I thought I would have to give up coffee completely rather than have it without creamer. But it was like being addicted to smoking, I just couldn’t stop. Then something miraculous happened: Oat Milk started to show up in Savannah and suddenly every coffee shop had it! Now, a year later I am down to a size 2 and I am sticking to it.

I moved back to New York, where I now walk a lot which comes easy when you live in the Big Apple. I also jog, practice Pilates, Yoga, and stretch. These are all easier for me now, two years later and a total of 70 lbs. lighter.

People always say that the hardest part about losing weight is keeping it off. However, by sticking with a plant-based diet, it helps me stay on track. I don’t even think about it and everything I eat is healthier, from what goes into my coffee to the plant-based snacks I reach for during the day. I do let myself eat sugar sometimes, and I don’t feel bad about it. It’s all about being conscious of what’s going into my body and how it will make me feel.

I make a smoothie in the morning using 2 shots of espresso, pumpkin spice almond milk from Trader Joe’s, coconut cream creamer, a banana, a multi-vitamin, and nutmeg and put it in a glass reusable container with a twist cap and toss it in my bag when I leave in the morning.

An easy go-to snack is sweet potato chips loaded with vegan nacho cheese melted on top and then covered in Bloody Mary Salsa (for a spicy kick) or Peach Salsa (for a sweet kick). Both toppings can be found at Trader Joe’s.

I also make a ton of salads, buying my ingredients on Sunday at the Grande Army Plaza farmer’s market. They also have a wonderful selection of herbs, perfect for making my own avocado toast!