Environmental catastrophes are all around us, with more than 70 wildfires burning in the western US this season, the worst in decades, having already scorched 1 million acres. Then we saw epic floods in Germany and Belgium as rivers overflowed their banks, sweeping away houses, cars, and everything in their path, with hundreds of lives lost. It's so hot along the Eastern seaboard that Maine feels like Boston did 20 years ago, while New York is more like Atlanta was in the 90s, and that city is now hotter than a typical Tampa summer was 20 years ago, according to the latest news from the National Oceanic and Atmospheric Administration which says last month was the hottest June on record for the US, causing 8 billion in damage to property from natural disasters.

Climate change is upon us and around us, but the very idea of it is overwhelming. What can we do about it? Until I can afford a Tesla or the government mandates that carmakers offer electric vehicles at every price tag, there doesn't seem to be much that you or I or anyone can impact, in a meaningful way.

What are the real-life effects of climate change?

It turns out that the food we eat contributes majorly to the carbon gases that get released from the earth into the air, then trapped in the Earth's atmosphere, creating a greenhouse effect that heats up the planet, causing the melting of ice caps, the rising of sea levels, and draught in our lakes and rivers. These climate changes are contributing to both the fires out west as well as the rains and flooding in Europe. As the poles melt and usual air patterns shift, these newly formed weather systems cause all hell to break loose, in an unscientific term. But it all starts with the way humans are contributing to releasing more carbon into the atmosphere, as well as the production of methane gas that is one product of factory farming.

Paul Greenberg, the author of The Climate Diet, offers 50 ways to help go from being "climate obese" to merely  "climate mildly overweight," which is to say if we each do something small every day, we can significantly lower our reliance on fossil fuels (the gas pump) and make a larger impact collectively (through diet and how we live our lives). And it doesn't have to cost us anything– plant-based diets may even save you money. Such as his suggestion that if we all added the right amount of air to our tires, we could cut our fuel emissions by 2 percent.

Another way to dial back our collective contribution to climate change is through our diets, to try to eat less meat and dairy. Even one plant-based meal a day, if everyone in America tried to do it, would have a significant impact on the climate that we see damaging our planet.

To reduce your environmental impact easily: cut down on meat and dairy consumption

The UN recently stated that if we humans are to create a sustainable food system, first-world countries need to give up meat. That may sound drastic but it's actually just a small piece of a larger puzzle, which is the impact raising cattle and poultry has on our water use, land use and carbon and methane emissions.

Think about the fact that Oregon has seen temperatures of 120 degrees this summer, while lakes in California and Nevada are drying up. These anomalies of climate change are drastic and require more personal behavioral change than substituting a beef burger for a lentil or vegetable pattie the next time you grill.  Part of the climate change picture happens in South America, where farmers are cutting down (or intentionally burning) large swaths of the rainforest to make room for animals and crops they can sell. Yet the rain forest and the biodiversity of trees help pump needed oxygen back into the air that we breathe.

It's as if you both smoked (adding noxious gases to the atmosphere) and had a lung infection (the effects of chopping down or burning up acres of trees in the Amazon to make room for farmland and controlled crops like palm oil trees). Something's gotta give, and right now the easiest way for us to dial back our personal contributions to this ugly picture is to ditch meat and eliminate dairy, even part of the time. The goal is to not support the damaging factory farming that is adding to the acceleration of climate change we're witnessing.

By going plant-based, even part-time, you instead begin to supporting plant-based farming in the form of growers of oats (by drinking oat milk) and farmers of peas (by eating pea-based proteins) which not only lowers greenhouse gas emissions, but both those crops are sustainable and help regenerate the soil by replacing the nitrates that plants pull from the earth. If everyone went even a little more plant-based, such as by having one meal a day without meat and dairy, it would have a vast impact on the environment. Consider this:

Eat Vegan for One Day and You’ll Save:

Eat just one plant-based meal a day for a year to save the pollution equivalent of driving 3,000 miles, roughly NY to LA.

What can I do to help climate change? 6 easy ways to take action today

If you cut out palm oil, you would help save the rainforests, since biodiversity is being compromised as farmers cut down vast swaths of wild growth to plant palm oil crops. 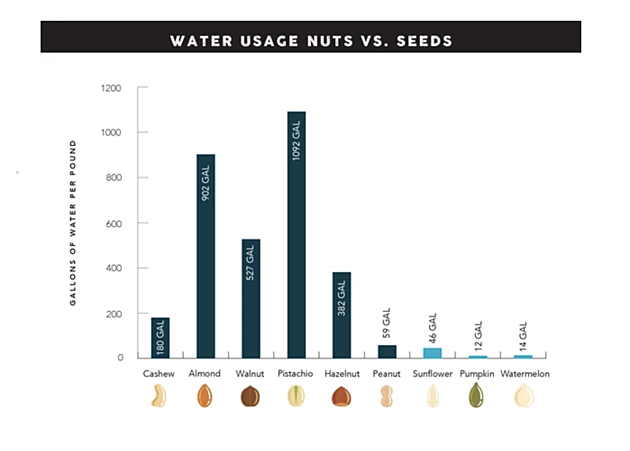 Think the benefits of a Planetary Health Diet, not of just cuttting out meat

Dr. Walter Willet, Professor of Epidemiology and Nutrition at Harvard T.H. Chan School of Public Health, and author of Eat, Drink and Be Healthy, told The Beet that we should adopt the "Planetary Health Diet" for our health and the health of our home planet. "Broadly, this means shifting toward a healthy plant-based diet; I emphasize healthy because donuts and coke are also plant-based, but obviously not healthy.

"A healthy and sustainable diet will be primarily fruits, vegetables, whole grains, nuts, soy, and other legumes. While being a vegan is one option, our diet can also be good for planetary and human health if we chose to include small to modest amounts of dairy, fish, and poultry, and occasionally red meat. We have documented that eating for planetary health can also be eating for our personal health, so this can be a double win."

When given the choice to take individual action on climate change, most people do nothing

The author Jonathan Safran Foer, who wrote We Are Weather: Saving the Planet Begins at Breakfast, understands the difficulty of getting people to wrap their heads around the fact that we can change, even if it means doing so incrementally.

"If the only option is to do everything or do nothing then we choose to do nothing," Foer told The Beet in an exclusive interview.

But there are other ways of looking at it, he explained. Pretty much every climate scientist agrees that we have to convince people to do the best we each can do, personally. "No scientist says we have to not have more than two children again or never fly again or never drive again or never eat an animal again. There is a huge difference between degrees of moderation."

Safran Foer explains that for many people, growing up eating meat is part of their identity, and hard to give up, even part-time. "Instead of thinking about it as an identity, think of it as your relationship to your planet, and see it more of a cause-and-effect change.

But so are other traditions that are in danger of extinction: such as going boating on Lake Powell, now lower than it's ever been in decades, creating a potential lawsuit over the critical use of the Colorado River watershed that 7 different states and 40 million people rely on for their livelihoods. Giving up meat, losing your usual vacation fun are all part of the evolving natural world that climate change is forcing us to reckon with.

Perhaps enduring a decade (the 90s) when Mad Cow disease brought more awareness about the perils of farming and the potential health risks, the UK has been ahead of the US when it comes to offering vegan alternatives and the awareness that what we eat matters.

An article in The Guardian points out: Meat provides the minority of your protein but uses the majority of our natural resources. The story quoted a recent analysis that found: "while meat and dairy provide just 18 percent of calories and 37 percent of protein, meat and dairy uses the vast majority – 83 percent – of farmland and produces 60 percent of agriculture’s greenhouse gas emissions."

The story also pointed out the shift in how crops are used to feed the livestock that feeds humans: "Recent research shows 86 percent of all land mammals are now livestock for humans. The scientists also found that even the very lowest impact meat and dairy products still cause much more environmental harm than the least sustainable vegetable and cereal growing.” This means that even if you have garbage cereal for breakfast it's better for the planet than eggs and bacon.

The good news is that more people are trying to eat more plant-based for the planet according to a recent survey. The number of consumers eating for the environment has increased by 17 percent since 2018, to 48 percent, the survey found. The survey found that the number of people doing so for the planet has grown, and is in close second place to the number of people doing so for the sake of human health. “In large part, people are choosing to eat plant-based foods more often because it’s better for the environment,” said Barb Stuckey, President and Chief Innovation Officer for Mattson, which conducted the survey.

So the next time you see a new disaster on the news or learn that hundreds of flights got canceled out of Denver due to poor air quality and lack of visibility caused by the smoke of the fires still raging out west in California and Oregon, or perhaps it's your vacation that got derailed, instead of thinking: That has nothing to do with me, or feeling like a victim, head to the food court and order a salad, a veggie burger or a breakfast of oatmeal and oat milk. You'll feel good about doing your part.