When you think of a motorcycle club, you imagine a group of guys and gals, riding on big, black Harleys, sporting leather and chains, rolling up to a bar for beers and burgers, but do you also imagine them asking the waitress to make it a vegan plant-based burger? Well cut your engines since that is the reality.  The Vegan Knights Motorcycle Club takes to the open road in vegan leather and big black  Harley’s to roll up to dive bars and gather around meatless meals to talk about veganism with any locals who will listen, for the purpose of raising money for animal sanctuaries.

On a recent interview on the Awesome Vegans Influencer Series, Vegan Knights Founders, Chris Green and Burak Sarac talked about exactly what it means to be a "tough guy " on the road and a softie in the kitchen, or at mealtime, and shared their favorite vegan snacks for life on the road.  Here is a clip from our longer conversation.

Elysabeth: What are your top tips for being a tough guy?

1. Being a tough guy means having a sense of purpose

Burak Sarac: To me, being tough is just being tough within a [personal] definition. What does being touch mean to you? And defining that to me means living with a purpose. Otherwise, it’s meaningless [to be tough] since you want to leave a legacy. So, for me… on a bike, I'm a tough guy, But I always remember the purpose of that tough guy. It’s standing up for the voiceless and for the animals.

Elysabeth: I love it, a tough guy is someone who stands up for the voiceless.

Chris Green: Yeah, so I think [being touch means] standing up for what you believe in and never backing down. You’re always going have the naysayers or someone who wants to challenge you, but I feel like, certainly with the Vegan Knights, it’s our job and our purpose to stand up for the unheard voices and that’s the vow we’ve taken, to protect animals. 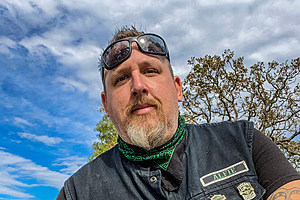 Burak Sarac:  It’s also breaking the mold. I liked riding bikes for many years before I was vegan, and I probably knew I could have gotten into a bigger club and had a lot more hierarchy up the chain and be respected in a different way by these big tough bikers. But, I thought: I’m going to be tough by making the tougher choice, breaking the mold, and doing the right thing.

2. Have the bold and uncomfortable conversations

Chris Green: Not being afraid to take criticism and then turning it around to make a bold statement. As I mentioned earlier [there is a perception that] vegans are ‘weak and pale.’ Or that we humans need meat to survive, and yet here I am, 20 years later, living the dream, right? So, you’ve got to have those bold uncomfortable conversations, such as dairy being a byproduct of [cruelty] and things like that. We’ve just got to stand up and take that criticism and turn it around.

3. Stick to your convictions but don’t be judgmental

Burak Sarac: Sticking to your guns and being able to learn and listen when you speak with people. They’re all in different places, different parts of their journey. I am tough about what my beliefs are and where I am, but I’m not judgmental, because being judgmental is not tough. It’s just not being understanding. I have to be open and stick to my truth.

Chris Green: Yeah, I think being comfortable enough to surround yourself with different kinds of folks [is key]. Being comfortable with who you are and what you truly believe in.

4. Have a big heart and accept change

Burak Sarac: I think the last one would be having a big heart. I think that’s where my toughness comes from. Being able to bring out what’s in there and just see it and not be afraid of it and if it doesn’t sound manly or it doesn’t sound strong, maybe there’s a reason for it. Dig in there and find out what it is and be okay with who you are.

Chris Green: Alright, I think it’s never being afraid of change. Attacking change: Laws change, people change, minds change, single-issue campaigns change. I mean we’re an ever-evolving society and, and change is not going to stop. It’s going to continue. It’s going to be here to stay, so we’ve just got to deal with it and roll with it.

5. Do no harm and know when to walk away

Chris Green: You know, I was just going say that in some circumstances we just have to ignore the opposition and know when to walk away. Some will never get it, because they don’t want to. But, I think we just need to know when to save our breath and move onto the next person. We’re not going save any lives arguing with people, you know, over and over and over again, that same person. So, you’ve just got to know when to walk away and seek the next victory.

Elysabeth: Speaking of food, what are your go-to snacks for life on the road.

For a full day on the bike, I make myself a garbanzo bean salad sandwich on a sesame bagel with vegan gouda, cucumbers, and tomatoes. I don’t mess around.

So be on the look-out. The Vegan Knights Motorcycle Club is riding loud and fast to a dive bar near you and standing up for the voiceless.

Elysabeth Alfano is a plant-based business consultant and an expert for mainstream media, breaking down the plant-based health, food, culture, business and environmental news. Follow her @ElysabethAlfano on all platforms.